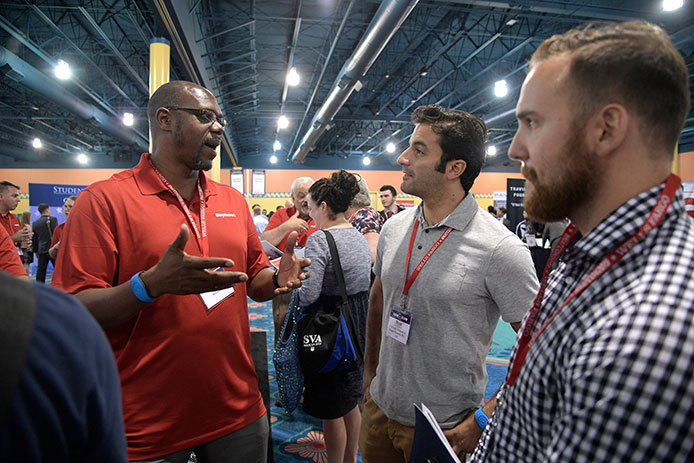 When civilian life was only months away, Jessie Senske began to wonder what her life might be like once she put away her U.S. Army uniform.

“I definitely needed to talk,” said Senske. “I went straight from college to the military, and figuring out what exactly I wanted to do in civilian life was difficult.”

That’s when she connected with American Corporate Partners, who matched her with Marla Skinner, a finance manager at Raytheon who also mentors veterans preparing for civilian careers.

More than one million veterans are expected to transition out of the armed forces in the next five years. Many need help as they explore new opportunities in civilian life. That's one reason why Raytheon offers such a wide range of support for veterans, from partnerships with groups like American Corporate Partners and Student Veterans of America, a non-profit focused on helping vets complete their educations, to services with a more personal touch: grass-roots efforts personally led by employees, many of them veterans themselves.

“When the program was first rolled out at Raytheon, my son was in the Navy serving on a submarine,” said Raytheon's Skinner, who has now mentored three veterans through the program. “I know the sacrifices that our military members make. This was one way that I knew I could help serve them in a rewarding way.”

Senske and Skinner began working together in February 2018, two months before Senske’s exit from the Army. They charted Senske’s goals over the next calendar year, found a book to read together and planned how to translate Senske’s hard-earned military experience to civilian life, starting with her resume.

“Folks in the military come out with great skills, but they may not know how to communicate those skills on a resume,” said Skinner. “The great thing is that their military background sets them up so well for the corporate world, especially because of their discipline and commitment to their work.”

Senske confirms that there's sometimes a disconnect between people in the military and civilians.

“Sometimes I would be talking to my parents and they would have no idea what I was saying in military language," she said. “It was great to have someone help me translate that experience.”

Since Raytheon first partnered with ACP in 2015, more than 150 employees have shared their expertise and career advice with 200 ACP veteran protégés. In addition to the mentorship program, ACP and Raytheon teamed up for a short-form, virtual “mentor from your desk” program. Employees exchanged hundreds of messages, providing guidance on topics like transferring military skills to the civilian work force, interviewing tips and how to navigate career advancement.

With Skinner’s help, Senske decided to pursue law and has networked in her new community of Buffalo, New York, with women in the legal field. She took the LSAT earlier this year, and is now waiting to hear about her acceptance into law school.

“The transition was hard, and I was lost at first,” said Senske. “It was great to talk with someone who was not only a civilian, but a woman as well.”

Every week, a dozen Raytheon veterans jump onto a conference call, spending an hour talking through a list of veterans who hope to work at the company.

Those employees help fellow veterans navigate the interview and onboarding process at Raytheon. They established an initiative called Hiring Vets, meant to ensure that members of RAYVETS, Raytheon’s employee resource group for veterans, are involved in screening and reviewing veteran resumes.

Matt Randi, a material program manager and founding member of Hiring Vets, received that kind of help getting into the company himself.

“Having gone through the process myself just over a year ago," he said, “I knew there were some difficulties and gaps in translation that needed be addressed.”

More than 14 candidates have been hired since the grass-roots initiative launched earlier this year. The team is currently tracking more than two dozen other candidates, and has recently connected with Elite Meet, a non-profit that helps Army Rangers, Navy SEALS and fighter pilots transition into the workforce.

"I benefitted from people pulling me in,” says Randi. And now he’s paying it back, one veteran at a time.