Imagine you’re more educated than many other working age Americans but find it harder to get a job. Then imagine once you obtain a job, you earn nearly 30% less than your peers, accounting for differences in sex, age, race, ethnicity, and education. These are just some of the challenges facing military spouses when trying to obtain meaningful employment in the United States. (Executive Office of the President of the United States, 2016)

Military spouses and spouses of recent veterans have unemployment rates nearly twice of the overall U.S. population between ages 18 and 65. They are also more likely to be employed part-time even when they would prefer full-time work. In fact, a U.S. Chamber survey found that 50% of military and recent veteran spouse respondents were working part-time despite their desire to work full-time. (U.S. Chamber of Commerce, 2017)

“I’ve always had an interest in maintaining my own career, but it’s tricky when you move often. In many ways, I felt like I was starting from scratch each time regardless of my previous accomplishments or education.” says Kyle D’Souza, military spouse and Cisco employee. “During interviews, I often find myself nervous to tell people that I’m a military spouse. I expect employers to question my commitment to my career, whether that be my ability to remain physically in one location for an extended period of time or my ability to focus on my work during my husband’s deployments.”

A significant barrier to employment for military spouses is how frequently they are required to move. Every two to three years military families are assigned a new location, forcing the majority of military spouses to leave their jobs and creating numerous gaps on their resumes. Gaps that most would-be employers find hard to overlook. Complicating matters, many times the military bases are located more than 50 miles from an urban center (U.S. Chamber of Commerce, 2017), which can limit employment opportunities.

“Being mentally prepared for the arduous search process helped keep my expectations in check,” says Kyle. “And because my career was important to both my husband and I, we’ve had to make serious sacrifices in order for me to secure a job. One career opportunity resulted in us being geographically separated for six months until I was able to negotiate a remote work arrangement.”

“In these times when remote working is becoming the norm, now is a great time for companies to take another look at how they work and what kind of talent they’re looking to attract,” says Gena Pirtle, Head of Military & Veteran Programs at Cisco. “Military spouses are incredibly resilient, resourceful, and flexible – attributes any employer would want, and remote working is really conducive for them.”

“Military spouses are one of America’s greatest untapped resources,” explains Lucie Piper, Women’s & Military Spouse Program Coordinator, American Corporate Partners (ACP). “They are not only more educated, but very adaptable. They are putting out fires at home, adjusting to constant change, and being primary caregivers. And they are very technology savvy and plugged in – out of necessity.”

Conducted entirely remote, the program is looking for mentors from a wide variety of backgrounds and experiences, and that meet the following guidelines: are 35+ in age, have 6+ years of professional experience, and can attend 12 sessions per year/monthly sessions. Fully supported by ACP staff to ensure the success of the mentor and protégé relationship, the program includes regular check-ins, assessments, and sharing of best practices.

If you are interested in learning more about Cisco’s Military Spouse Program, please email milspouse-support@cisco.com. 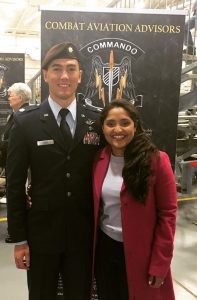