ACP supports U.S. veterans as they transition from career military service to the civilian workforce by providing networking opportunities, online career guidance, and free mentoring programs. AECOM is among the more than 65 corporate partners currently working with the nonprofit to help bridge the potential employment gap for an estimated one million veterans during the next five years.

“After years of service to our nation, veterans are seeking guidance and informed opinions to navigate the ‘what’s next’,” says AECOM’s Stuart Harrison, a retired Colonel and ACP mentor since 2015. “Mentoring is an honor and a responsibility I take personally.” After serving 25 years in the U.S. Army Corps of Engineers, Harrison knows firsthand what it’s like to make this type of career move. 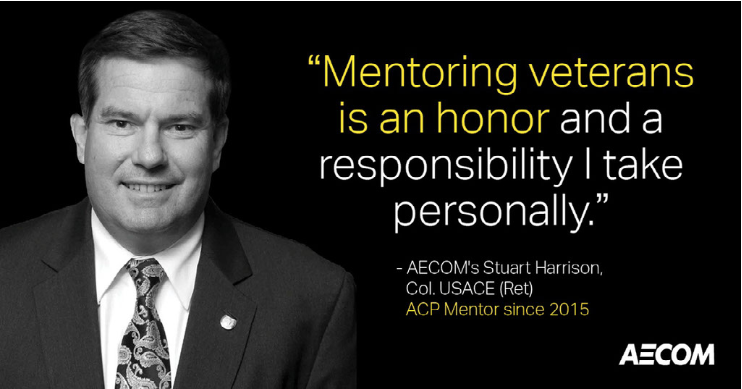 For mentors with a similar trajectory, ACP is about helping fellow veterans navigate a career path they know well. “I have been blessed with a post-military career that I love,” says AECOM’s Gary Engle, a retired Rear Admiral with the U.S. Navy. He views the opportunity to mentor as a chance to give back. “I want other military members to experience similar fulfillment by achieving their career goals,” he says. “This is a great way to help them do exactly that.”

According to ACP, the efforts of Engle and other mentors are working. “This mentorship has already paid off in dividends with just one phone call and a few emails,” said Jonathan, a U.S. Air Force protégé paired with AECOM’s Bill Bennett. To date, 280 AECOM employees have mentored 369 veterans through the program. Last year alone, nearly 2,000 protégés secured meaningful employment during the ACP mentorship process and 100 percent of those mentored by AECOM participants said they would recommend ACP to a fellow veteran. “ACP offers a great way to pay it forward,” says Bennett, a retired Army Colonel. “I feel lucky to be able to help a veteran this way.”

While many ACP mentors are veterans themselves, it isn’t a requirement for participation. AECOM’s Liz Santonas describes herself as “the complete opposite of a military-type person,” but she has helped three ACP protégés to date. “I’m proud to be able to help someone who has risked their life to make sure I have the freedoms I’ve had since I was born,” she says.

AECOM’s Brooke O’Brien started mentoring her first ACP protégé in April 2018. O’Brien isn’t a veteran, but she grew up in a military family. “These men and women do so much for us, it’s the least I can do for them.” 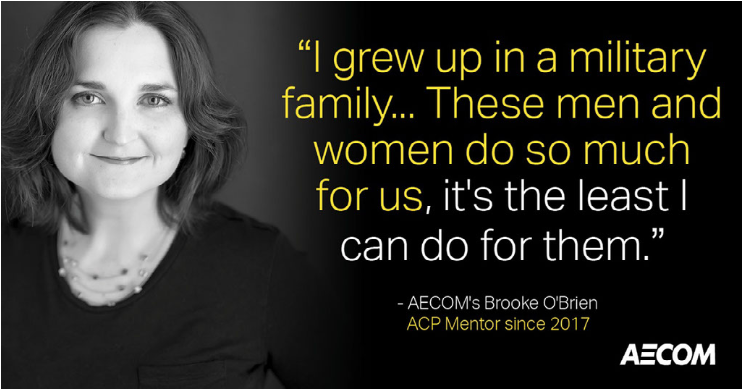 Dave Thoman, an AECOM ACP mentor since 2016, agrees. “I have such respect for the men and women who have served our country to preserve the freedoms we enjoy.” He says the four protégés he’s worked with have inspired his own life. “It starts with personally embracing and applying the advice that I give them.”

Our mentors also resist the notion that any veteran should be pigeonholed. “Don’t feel obligated to follow a prescribed career path because that’s what you’re currently doing in the military,” Harrison advises. “Most veterans have a variety of experiences and capabilities that are marketable across the private sector.”

Mentorships are typically a yearlong commitment, structured to include at least monthly opportunities for mentor-protégés to discuss goals and issues, whether it’s in person or via phone, videoconference or email. In addition to one-on-one discussions, the program often includes resume critiques and interview preparation. Each relationship is handpicked by ACP staff based on age, education level, location, shared career interests and other factors. Engle was most recently matched with a Marine Corps junior officer. “We had a call every other Saturday to work through the career development regimen I developed, making adjustments based on the protégé’s input and needs,” he says. “It is so rewarding to help other veterans through every step of the process until they have secured the job they want.” 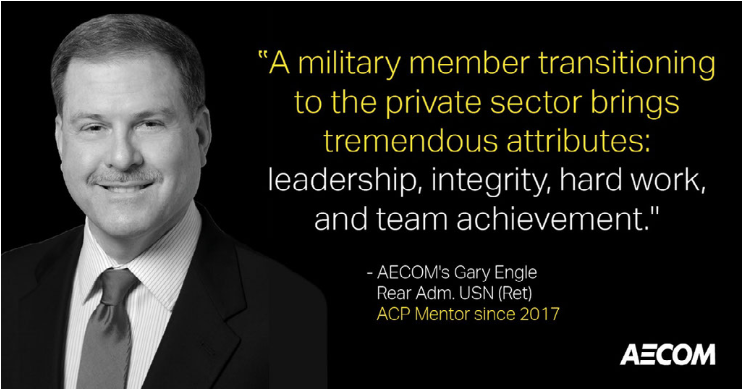 Participants often find the relationships they’ve built through the program lead to lasting connections. Thoman’s third protégé visited him in South Carolina this past summer and they plan to stay in touch. “I have been moved by my protégés’ commitment to the mentorship process,” he says. “Their sincere expressions of gratitude mean so much, knowing the sacrifices they’ve made.”

“It is extremely gratifying to share experiences and assist veterans in this process,” says Engle. All of his protégés still keep in touch. “I have mentored three military members so far,” he says, “and each one of them got the career choice of their dreams.”

If you’d like to become a mentor or would like more information on the program, visit www.acp-usa.org or email AECOM’s ACP liaison, Lisa Tharp-Bernard.