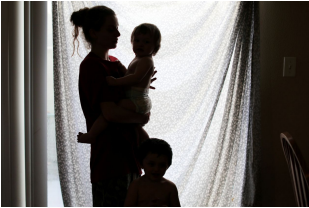 Mike Quinn served in the U.S. Army for 24 years, rising to the rank of sergeant major. He deployed to Iraq, Afghanistan, Bosnia, the Philippines and Korea. Between deployments, he met the woman he married. They moved seven times in the next nine years, once to Japan. Each time, his wife had to seek new employment. He eventually retired due to the toll on his family.

Don Evans is a lieutenant colonel in the Army. He’s been married for 19 years and his family has moved seven times. His wife, a nurse practitioner, had to get a new license each time they moved—a costly process that can take months.

Tom Bostick retired as a lieutenant general after 38 years of service during which his family moved 27 times. Each time, his wife, a teacher and later a principal, had to find a new position. In one case, school-district officials rescinded an offer for an administrator’s job because they worried she wouldn’t stay long.

It’s an all too common story. Each Veterans Day, Americans recognize our active-duty military and veterans. We should also recognize their spouses. There are more than 600,000 of them, of whom more than 90% are women. They are 10 times as likely as civilians to move across state lines. A military family typically moves every two to three years. The greatest challenge isn’t packing, setting kids up in new schools, or making new friends. It’s finding meaningful employment for the spouse.

Unemployment, while near record lows nationally, is two to three times as high for civilian spouses of active-duty military, according to a 2016 study by Blue Star Families. And more than 35% of military spouses consider themselves underemployed.

The problem isn’t going away even as overseas wars wind down. Certifications and licenses rarely translate across state lines. As abundant as employment opportunities are, it isn’t easy to get hired when the prospective employer expects you’ll leave town in 18 months. It’s even tougher to find jobs overseas.

At American Corporate Partners, a nonprofit veteran mentoring program, we are trying to do our part. Now 10 years old, ACP has assisted more than 13,000 veterans with the transition into new careers in the private sector via yearlong customized mentorships. With financial support from two corporate foundations, this week we are launching the first mentoring program for military spouses. Our goal is to assist 1,500 spouses in the next two years. Focusing on military spouses is the right thing to do, and it’s an issue of national security. Too frequently senior service members retire not because they want to leave the military but because the toll on their families is too heavy. Between now and next Veterans Day, American companies should outline their plans to assist veterans and their spouses. Their service deserves our service.

Mr. Goodfriend, a retired investment banker, is founder and chairman of American Corporate Partners. News Corp, which publishes the Journal, is a participant in the ACP veteran mentoring program.